Djibouti’s Lake Assal, recognized both as the lowest point in Africa and the world’s largest salt reserve, holds more than six million tons of precious salt. After thousands of years, local miners still endure the arduous journey through the highlands and into the Danakil Depression with their camel train transporting the “white gold” to Ethiopia.

The Cushtitic, or Afar people, inhabiting the Horn of Africa bravely continue to endure the 6,000 kilometer long trek through the biting winds and the blistering sun to make an honest living by selling salt from the Lake Assal. Their largest hurdle lies in passing what many in the region have nicknamed Hell: the Danakil Depression, a divergence of tectonic plates with erupting volcanoes and 60°C temperatures. Before they can load their camels with salt bricks and fade away into the distance, they must break the ground open with their bare hands to extract the salt. To the untrained eye, the crystal white salt deceivingly resembles sand, yet the texture is extremely painful to the touch.

Bricks are the easiest form in which to both extract and transport the crystalized salt. But the particularity of the salt from this lake lies within its rare form of perfectly rounded spheres, the Afar Salt Pearls. A laborious course of action

The salt bricks are hand-carved from the shores while the salt pearls are fetched beneath the intensely briny water of the lake, nearly 10 times saltier than seawater.

However small and delicate, they are the driving force behind the callous travel to Ethiopia. Selling them generates a humble income for the Afar miners and their families who work as a team, with men sifting through the lake while the women carefully sort the pearls according to their size. The sizes of the salt spheres vary, dictated by mother nature and its relentless winds. The naturally formed, perfectly smooth and rounded granules have been coveted since the 6th century.

Those resolute enough to preserve their ancestors trade, travel for up to five weeks before reaching the Ethiopia with their caravan, making stops – first in Debye, then Barkato, Balho, and finally Aile Da-ar. 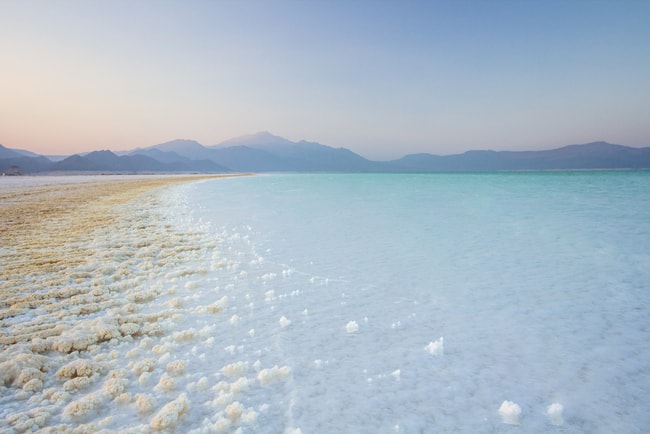 However, the difference now is that their business extends far beyond their neighbors, with numerous tourists passing by Lake Assal to catch a glimpse of the bewitching body of water and get their hands on the inestimable “white gold.”